Harmattan provides alternate glyphs for a number of characters. These are implemented in 3 different ways (OpenType, Graphite and TypeTuner Web) for support in different applications and rendering systems. Ideally the selection of these font features is done in application programs, but many applications do not yet support this functionality. In response to this lack of support for features, a program called TypeTuner (command line version: TypeTuner and web-based version: TypeTuner Web) allows users to create derivative fonts with their own feature settings based on the needs of a local project or region.

These features are documented in this document:

Language-specific features are generally turned on by selecting text in an application and setting the language. In English, you can select English UK or English US and different spelling rules are applied depending on which one is selected. The same is true for other languages. Besides spelling rules, setting a language can also affect font behavior. Harmattan has a set of default behaviors. However, it also contains OpenType and Graphite smart font code to change the behavior based on language selection. In Harmattan there are language-specific features for five languages. These are Kurdish, Rohingya, Sindhi, Urdu, and Wolof.

The language-specific features that are in the font are described in the Harmattan Font Features Guide and are illustrated in the table below: 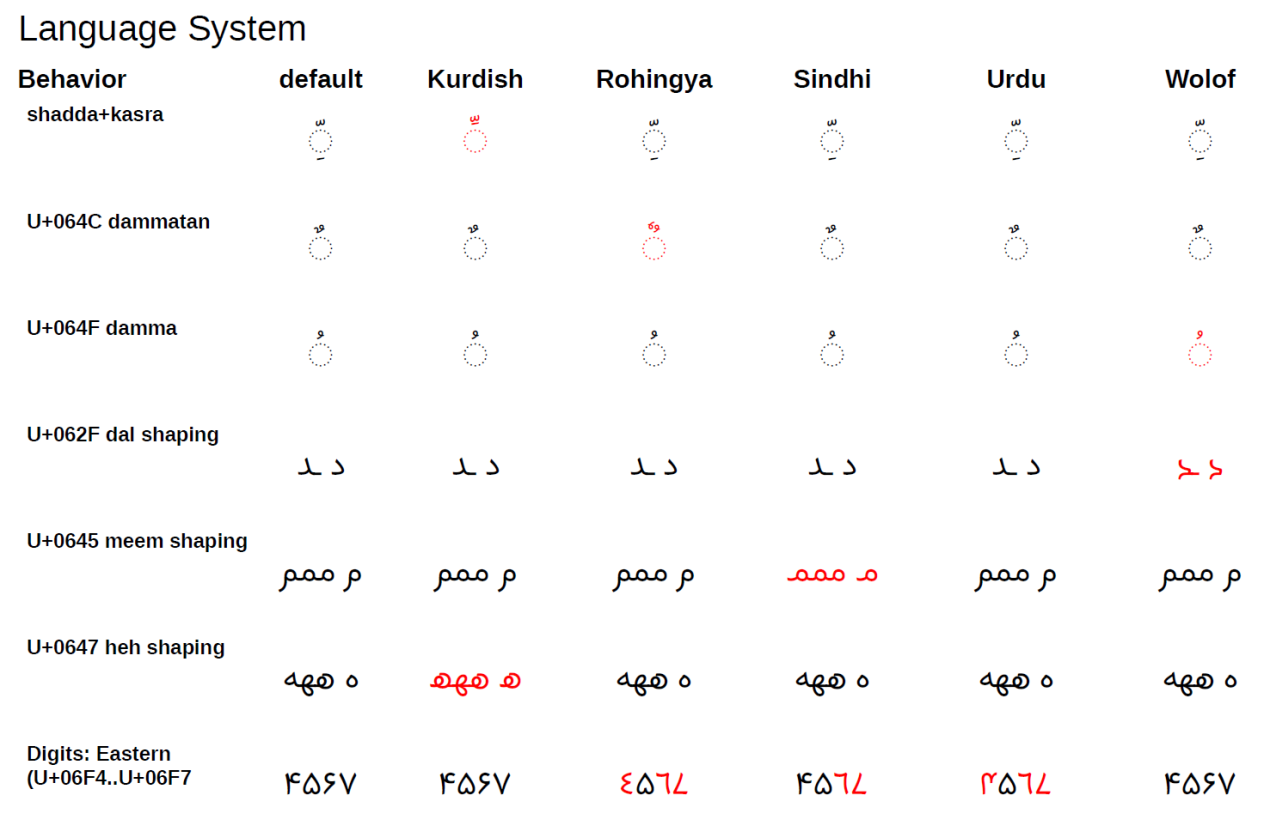 These character variants are also available with Graphite rendering and can also be selected as part of a derivative font with TypeTuner Web.

Additionally, Harmattan includes two simplified alternates for U+06DD ARABIC END OF AYAH under the Stylistic Alternates (salt) feature, but at this time we know of no OpenType-based applications that can access these. The two alternates are also available through the Character Variants feature.

The subtending marks are also available with Graphite rendering and the End of ayah variants can be selected as part of a derivative font with TypeTuner Web.

For applications that do not make use of Graphite or the OpenType Stylistic Sets or Character Variants features, you can now download fonts customized with the variant glyphs you choose. Read the Harmattan Font Features Guide, visit TypeTuner Web, then to choose the variants and download your font.