WeSay has always had Tasks which would show you just the words that needed some more information in a particular field. However, the selection of which entries to show was pretty blunt: if the field had an empty slot in any of its multiple writing systems, the task would show that entry. This meant that you couldn’t easily set up WeSay for a user who, for example, just wanted to add vernacular definitions where English ones had already been entered.

In another case, we might want to set a user up to add voice recordings of example sentences. But the task should only show example sentences where someone had previously entered in the example text.

The latest development release (0.5 build 2000) addresses this. When you first create a project, tasks are configured to have the same behavior as before: an entry will be chosen if any of the writing systems assigned to that field are empty. 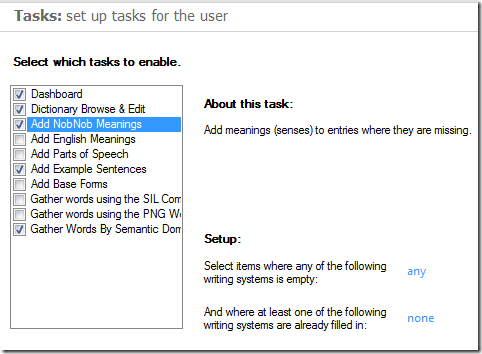 You can now limit the task to filling in the vernacular (gaw, in this example):

In addition, we can limit the task to only those entries where some other writing system has already been filled in:

Thanks, Mark, for taking the time to submit this request. We would appreciate any feedback you can give us on this feature. Does it work well for you?

The obvious next step would be to add a way make duplicates of some tasks, so that you could have both an “Add Examples” and an “Add Example Recordings” task. This is now possible by editing the .wesayconfig file in a text editor. If you want to know how, set me an message. That will tell me how much demand there is for it, and if there’s enough, we’ll make it easier.