Collaboration is more than just sharing changes. It turns out that as soon as you start working with others using Send/Receive, you find you want to write notes to them. So we added the ability to attach questions to lexical entries, and to carry on conversations about the question. Future versions will add other kinds of notes, and allow them to be attached to particular fields, not just whole entries.

In the following screenshot, notice the circled buttons. We’d click the left-most to add a new question to this entry. The other button represents a previous, unresolved question. A click on it brings up a dialog box in which we can read and answer the question.

Ok, but how do you find which entries have unresolved notes? WeSay 0.7 also introduces the Notes Browser, which lets you find and interact with notes from all over the dictionary: 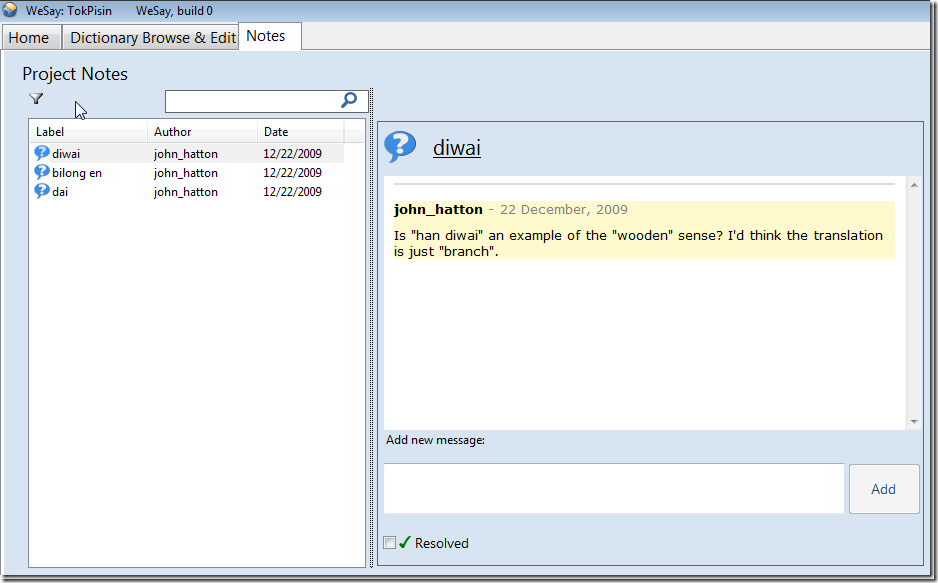 In addition to Questions, WeSay currently supports just one other kind of note, the Merge Conflict. These are created by the automatic merger when two team members edit the same field at the same time. Unlike traditional version control systems, Chorus (the engine we’ve written to do all this) doesn’t stop the merge and force you to deal with the problem immediately. Instead, it makes its best guess as to what to do, then creates a Merge Conflict Note which the team can read and deal with when it is ready.

If you don’t like what the merger did, go the entry and make whatever changes are necessary. Then click the resolved box to show that this has been dealt with. Or if you need to discuss what to do with a teammate, add a new message to the note. In the following screenshot, I’ve highlighted the hyperlink at the top, and the Resolved box at the bottom.