There are many ways to make a print dictionary using WeSay. Below, they are ordered from most powerful/flexible down to the most simple. You might end up using a combination of methods. For example, you might use the “Make PDF Dictionary” for regular printouts used to include a wider group of people in the process of spell checking, example checking, etc., using paper. Later, when you want to actually publish a dictionary, you’re likely to want to import the WeSay dictionary into our Linguist-oriented power tool, FLEx.

This has many steps, but it is best path for serious dictionary layout. You’ll be using two other free programs from SIL International: FLEx and PathWay. You may also need some supported word processor, depending on how you want to publish.

This will open Pathway, which will let you create files for Adobe InDesign, Word, Open/Libre Office, PDF, and E-Book.

One advantage of using OpenOffice/LibreOffice is that you can add a cover page and make other changes. Another is that it supports a wide range of scripts, including those in Southeast Asia. The downside is that the code that does this was contributed to us, and tends to not get much attention from the WeSay programmers. It does not support custom fields. To use it, just make the the “Make OpenOffice Document” button visible in WeSay, using the WeSay Configuration Tool | Actions tab.

Lexique Pro is a separate free program (Windows Only) which can export to word processing programs, and also to make static web pages. In this method you use WeSay’s Export a SFM (Toolbox) file button, and then open the the SFM file it produces in Lexique Pro.

The Open in Lexique Pro Button

This is a simple, one-button way to get into LP. Unfortunately, as of writing this in Jan 2013, several of LP’s features have not yet been upgraded to work with LIFT dictionaries (the XML format used by WeSay).

The advantage of this approach is that it is fast, easy, and fairly good-looking. Disadvantages include:

Under the hood, WeSay uses an engine called “Prince Xml” for creating PDF documents. You can download it for free, but if you use this feature for any commercial purposes, you’ll need to get a license from the authors of PrinceXml. Here’s what the output looks like: 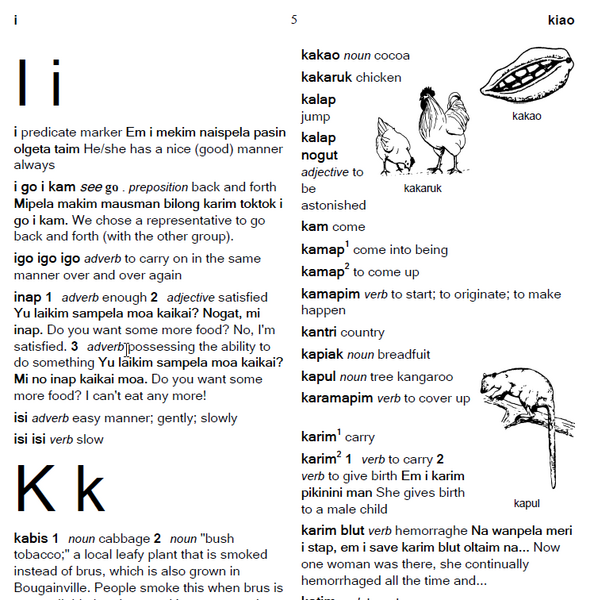 While PrinceXml itself is extremely flexible and powerful, WeSay only uses it for printouts using just the most common fields. If you need more power, you need to go the FLEx+PathWay route described previously.

To enable this feature:

Starting with version 1.1, if you have digraphs (or trigraphs) that you would like to group together, do this:

If you like what comes out, great. If you want to do some tweaking, then look in the Export folder of your WeSay project. There, you’ll see two files which you can edit: customLayout.css and customFonts.css. These are simply Cascading Stylesheet (CSS3) files. The web is full of free references and tutorials on CSS. The way this works is that WeSay first generates a “plift” XML file (also in this Exports directory). It then converts that to XHTML. Finally, it asks PrinceXML to create the PDF, using the four stylesheets. The precedence of these is such that the “custom” ones overrule the “auto” ones.

If you have custom fields you want to print, you’ll need to add those to the customLayout.css. TODO: show how.

If you find that you need extensive customizations, you’re probably better off using FLEx+PathWay to do your actual printing. Again, this built-in printing is only intended to be good enough for quick printouts that you can hand out for checking in the community.

The most recent version of PrinceXml with which we have tested WeSay is 8.1.