The Eee is, so far, the best selling of the new wave of 4P computers; laptops which are characterized by low Price, adequate Performance, Portability, and low electrical Power requirements. Now, this is no OLPC; it costs around $500 and isn’t as rugged. It does not aim at the same ultra-low power usage. But it does have two things over the OLPC today: you can buy them on Amazon and you can get them with Windows XP. (Yes, sadly we’re still waiting on some open source pieces to mature on the Linux side before we can get WeSay running on the OLPC and other Linux boxes).

So, how would WeSay run on this relatively slow (900 Mhz), relatively low-wattage machine? Getting Windows installed and running, the Eee felt very sluggish. Because of delays, I found it easy to make errors when using a web browser. Very slowly, I grabbed .net 3.5 sp1, then WeSay build 1451. Very slowly, I ran the installer. By this time, I wasn’t expecting to have a happy WeSay experience.

To my surprise, WeSay runs GREAT on this box! Changing records, finding words, and bringing up new tasks were all pretty snappy. 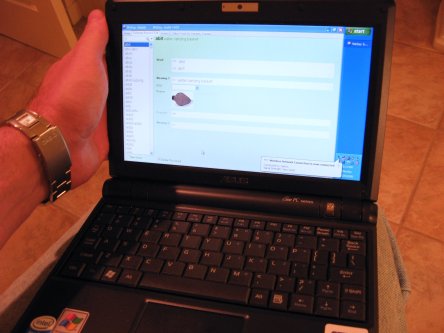 I only did a quick walk-through using the sample data, so please don’t go out and purchase a hundred Eee’s to run WeSay based on this blog post.