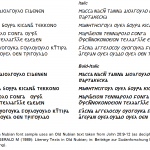 Compiled and uncompiled TECkit conversion tables for legacy to Unicode are available for download. One set of mappings uses the legacy fonts Nobiin, Ibrim, Nubian (Dr. Mokhtar), while the other uses the legacy Nubian (Mokhtar.M and Kashef.H) font. The maps can be used with TECkit and/or SILConverters. They have been minimally tested.