This package provides tools through which you can change the encoding, font, and/or script of text in Microsoft Word and other Office documents, OpenOffice and LibreOffice documents, XML documents, and SFM text and lexicon documents. It also installs a system-wide repository to manage your encoding converters and transliterators (TECkit, CC, ICU, Perl, or Python based, as well as support for adding custom transduction engines).

For developers, it provides a simple COM interface to select and use a converter from the repository. It is easy to use from VBA, C++, C#, Perl, Python or any .NET/COM enabled language.

The core EncConverters assembly is fully integrated with FLEx (FieldWorks Language Explorer), Speech Analyzer, Phonology Assistant, Adapt It and OneStory Editor software. It provides the same system-wide registry of installed and available encoding converters for all of these user programs. Additionally the package includes some extra utilities such as a clipboard converter for manipulating text between cut and paste operations.

The following picture illustrates the suite of tools, utilities, and applications that are available and how they interact: 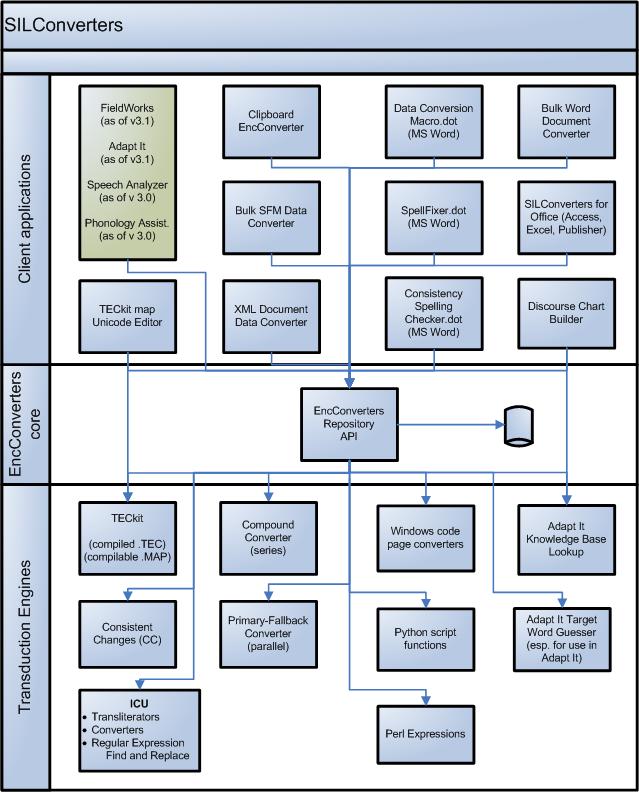 If you are an end user, you are probably most interested in how to use EncConverters with client applications—for example:

If you are a developer, you may be interested in

This version (4.0) was released to fix various bugs including most significantly the removal of the core EncConverters assembly from the Global Assembly Cache. From v4.0 and following, client applications will redistribute the core assemblies ECInterfaces.dll and SilEncConverters.dll with their applications directly. They can still share the same global system repository of activated converters, but there will be less dependency between the various clients in terms of release requirements.

As of v3.1.1, a new transduction engine was added that provides support for the webpage-based converters in the Scientific and Technical Hindi Google Group. The Files section of that group contains a number of webpage-based encoding converters and transliterators for numerous Indic legacy encodings. The conversion code embedded in these web-pages can now be used to convert data with any SIL Converters client application (e.g. the Bulk Word Document Converter) by using the new Technical Hindi Html EncConverter Add-in. To activate this new add-in be sure to check the Maps and Tables, Indic converters feature during installation. Once installed, you can read Help for Technical Hindi (Google group) Html Converter Plug-in (in Start, All Programs, SIL Converters, Help) for further instructions.

The Bulk Word Document Converter was also updated to fix a few problems related to converting text that was inserted into a document a single character at a time (thru the Insert Symbol command). The Bulk Word Document Converter has been enhanced by adding a search feature which will search your hard-drive for documents containing specific fonts to be converted. The TECkit Map Unicode Editor has also been enhanced to show character maps for both the left and right-hand side of a conversion so that a point-and-click approach to encoding conversion can be used in developing the map.

Note: You will need Administrator privilege on the computer to install this software.

The Master Setup program runs a series of installers:

Both installers may require an internet connection if you do not have .NET 4.8 installed. The installer will prompt you for necessary prerequisites.

Most end-users are interested only in a small number of encodings. Typically, computer support people have created TECkit maps and/or CC tables for the various encodings used in each entity, alleviating most end-users from having to create their own maps and tables.

Because there are hundreds of possible encoding converters and transliterators that different end-users may be interested in, they are packaged into logically-related groups of converters and are available via a two-step process.

Note: Installing maps and tables onto your computer with the SILConverters installer (step 1 above) will not make them available to SILConverters client applications unless you explicitly add them to the system repository using the Converter Options Installer or some other mechanism (see Adding Converters to the System Repository in the Help for SILConverters document). 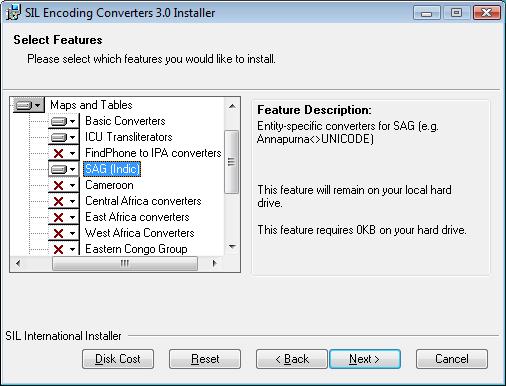 The following sections give the details about fonts and encodings for different Maps and Tables packages:

Converters and Transliterators common to all SIL. This includes the following:

Configuration information for the following ICU transliterators are for Unicode-encodings only.

These are not the only transliterators available via the ICU Transliterator transduction engine, but are only a few of the pre-defined latinizing (or romanizing) transliterators that can be useful in different client applications for different ranges of Unicode.

Adds the following converters for dealing with FindPhone encoded data:

The following ISCII encodings are supported:

The following Himalli encodings are supported:

This package contains TECkit maps for the following Indic encodings:

If you would like to report a problem, you can create an issue in SIL Converter’s issue tracker. Or, you can send an email via the contact form below.