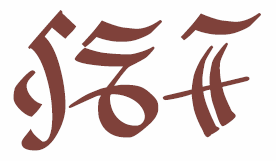 Lepcha script is used by the Lepcha language of South Asia. This script has been in Unicode since Unicode 5.1.

Mingzat is a Unicode font based on Jason Glavy’s JG Lepcha custom-encoded font. With his generous permission we have used his design and released the font under the SIL Open Font License (OFL).

The name “Mingzat” means “treasure of letters” in the Lepcha language.

A selection of characters from various other Unicode blocks is included in Mingzat. A utility such as SIL ViewGlyph can be used to examine the exact repertoire of this font.

¹Inclusion of basic Latin repertoire is provided as a convenience, e.g., for use in menus or for displaying markup in text files. These fonts are not intended for extensive Latin script use.

This Type Sample document demonstrates the characters and a sample text.

Lepcha is a complex Indic script which requires reordering. The font has been tested to work on Microsoft Word, Microsoft Edge, Notepad, LibreOffice, Firefox, and Adobe InDesign. There may be some settings which must be modified in order for the font to work. For example, in Microsoft Word, go to the Font / Advanced menu and select Ligatures / All. In Adobe InDesign, select Paragraph / Adobe World-Ready Paragraph Composer.

The font has been tested in Microsoft Word, Notepad, LibreOffice, and Adobe InDesign. It also works in Microsoft Edge and Firefox.

A compiled and uncompiled TECkit conversion table can be downloaded which maps data using the JG Lepcha font to Unicode. This map can be used with TECkit and/or SILConverters. It has been minimally tested.

Mingzat can be used with any Unicode Lepcha keyboarding program. The Lepcha (SIL) Unicode keyboard for MacOS and Windows is based on a phonetic representation of the script.

This font is licensed under the SIL Open Font License (OFL).

Mingzat is licensed according to the terms of the SIL Open Font License. The latest source files are available in a Github project.

General troubleshooting information, including frequently asked questions, can be found in the documentation. Additional information is also available on the general Font Help Guides page. If that fails to answer your question, send an email via this contact form.