For a long time, I’ve had the crazy idea that audio should be just another kind of “writing system”. I’m happy to say that now, crazy or not, you can set up a project to like this: 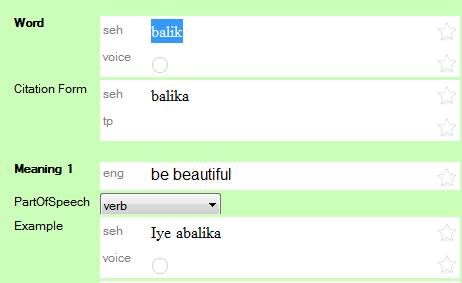 Notice the circles there? They’re trying to be unobtrusive. When you move the mouse near, they light up:

As long as you hold the mouse button down, your voice is recorded. Like a walkie-talkie. Then, the symbol changes:

and when you go near that, you have a play and a delete button:

How is this useful? For one thing, as electronic dictionaries become more common, wouldn’t it be nice to hear the word or example sentence? This might also be helpful for language learning, by gleaning the sounds and dictionary file to create listening exercises.

How to set it up

WeSay Version 0.8 Instructions: In the configuration tool, go to Writing Systems and make a new one called voice. Then set the is audio switch to true.

Update October 2010, for Version 0.9: Here’s how you should fill in these fields starting with WeSay 0.9:

Actually, I can’t get this blog to show the screenshot. Sigh. Here are the fields you need to fill in:

All the fields except the “ISO” one should be exactly as you see above, even with all the ugly “x”s (we didn’t make the standard, but this is an international writing system ID standard (RFC5646) with which we must comply if we want to share data with other applications, such as FieldWorks).

Now go the Fields section, and tick voice next to any field you want to include this voice capability. 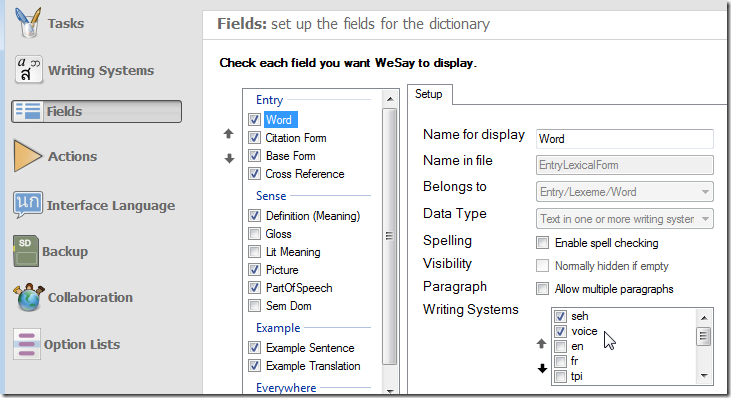 Note, you could have multiple voice writing systems, carrying different accents, genders, whatever.

Please, let us know if you have a chance to play around with this, and any experiences you have using it with a native speaker.

This is currently available in our 0.5 line, for Windows only. Linux could follow soon, especially if we hear from you.

All sounds are saved as .wav files under a new audio subfolder of your WeSay project. Their names are a bit unwieldy at the moment, largely to keep the code simple as long as this is still a proof-of-concept. Files are named as the form of the word + a time stamp, so that multiple recordings in the same word (or homograph) don’t step on each other.