Improvements in font technology are making it possible and desirable to change how SIL font families that contain a range of font weights are organized. These changes may affect how font styles are chosen in the menus and dialog boxes of some applications. New axis-based font families open up exciting possibilities for greater typographic variety but can be confusing. This article hopes to reduce that confusion and help you understand how to work with these enhanced font families. This change to axis-based font families only affects projects that have multiple weights beyond common Regular, Italic, Bold, and Bold Italic styles.

SIL fonts have traditionally been organized into families of at most four fonts: Regular, Italic, Bold, and Bold Italic. These share a family name and work as expected with applications that have ‘B’ and ‘I’ buttons to switch between the styles. These are commonly referred to as ‘RIBBI’ families, even for two-member families with no italic styles.

If there were more styles or weights than fit into a single family, additional two- or four-member families were created with a different family name. Some examples:

If you were using Gentium Plus in Microsoft Word, but wanted bold text that was heavier than what the normal ‘B’ button provided, you would need to change the font to Gentium Book Plus, then hit the ‘B’ button.

It is now possible to group a wide range of font weights into a single font family. This has some advantages, particularly for web sites and web apps. We call these ‘axis-based’ families since the range of weights match up with the axis of weights that can be specified through the CSS font-weight property. An axis-based family with multiple weights could include all of these weights, but more commonly will include only some of them:

A new axis-based version of Gentium Plus could be organized this way: 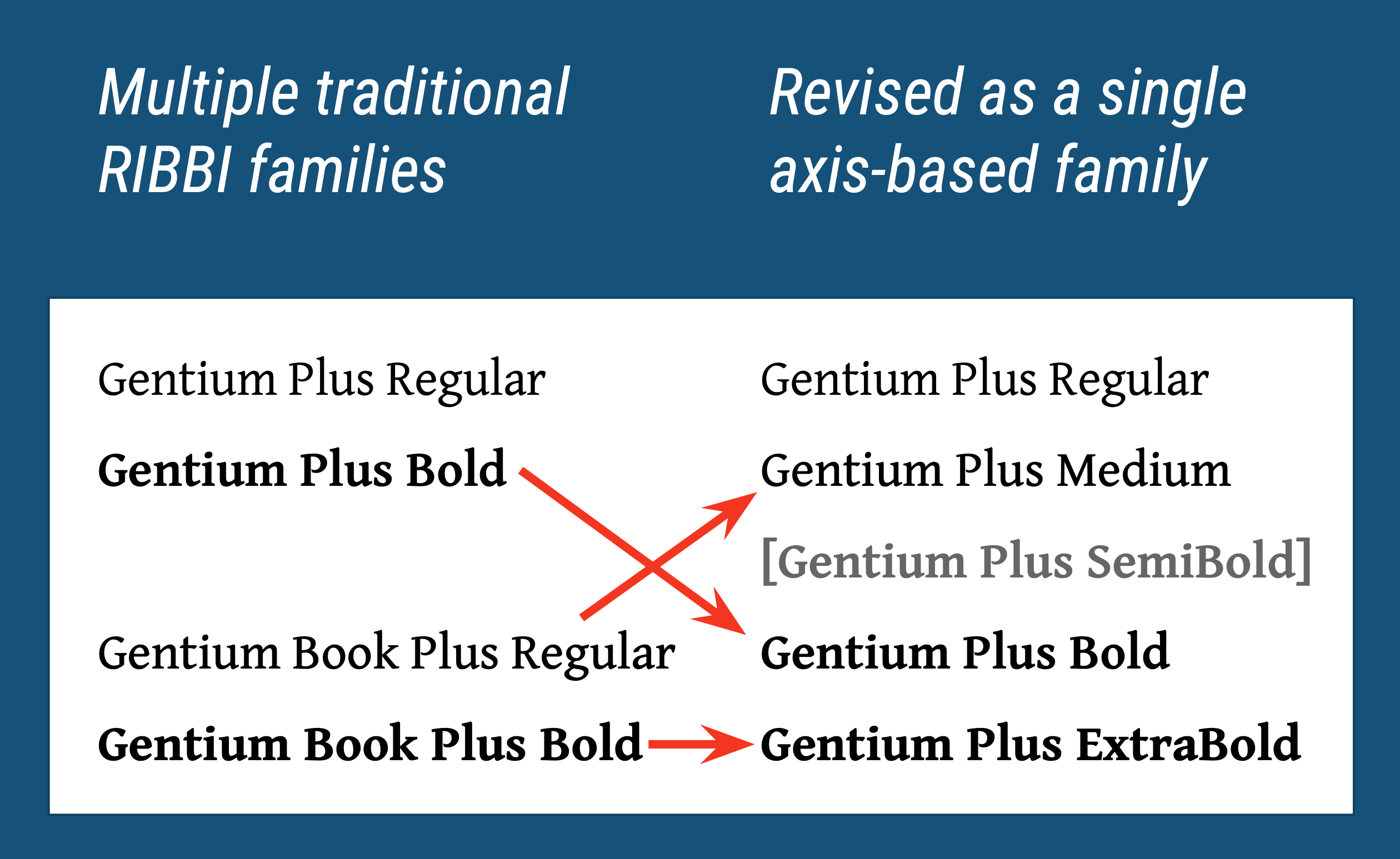 Italic styles are handled in a similar way, and continue to be linked to their non-italic counterparts.

Axis-based font families have many advantages:

If you are using only the Regular and Bold (or Italic and Bold Italic) weights, axis-based fonts will work identically to RIBBI ones. There should be no change in how you choose those weights in applications. You will typically choose the font family to get Regular and then select Bold. If the app has ‘B’ and ‘I’ buttons (and corresponding keyboard shortcuts) they should work as expected.

Applications differ in how you choose the other weights (Light, ExtraBold). Although there is a wide variety in how that is done, even within a single app, there are are two main approaches:

These apps list the single family name and then offer the full range of weight options. This is considered to be the proper modern way for applications to present a family with multiple weights. It is used by Adobe InDesign, Google Docs, and most macOS apps. Examples: 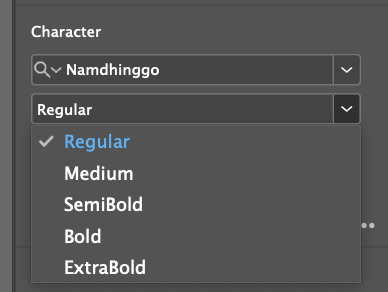 In Adobe InDesign all weights, in weight order, are shown hierarchically under a single family name, or as separate options in a pop-up style menu. 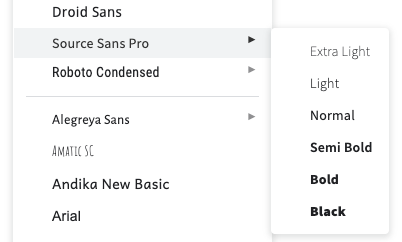 Google Docs now supports many axis-based families and presents them as a single family. The ‘B’ button will always give you the standard Bold weight no matter what weight is currently applied to the text. 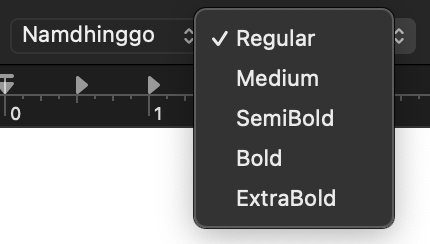 Many macOS apps present the family first, and offer the weight in a separate typeface style menu. The above example is from TextEdit.

LibreOffice (7.3.3 macOS) tries to use this approach but has some odd problems, including completely leaving out some weights (Medium in particular).

Microsoft Word and some other Windows apps

These applications list weights (except Bold) as if they were separate families. This happens with Microsoft Word and some other applications on Windows. It can be confusing and cause problems.

Microsoft Word (Windows) lists all the weights—except Bold—as if they were separate font families with the weight name added to the end of the family name. However there are some significant difficulties:

LibreOffice (7.3.3 Windows) has similar problems as Word. It wisely does not offer fake Bolds but does offer fake slanted Italic.

We are already producing and releasing axis-based families such as Namdhinggo, and more projects—both new and updated—will be axis-based in the future. Some common questions and answers:

When will projects switch to be axis-based? It depends on the project. Since this is a major change we intend to only switch this in a major version change (such as v6 to v7). For some projects this will be soon. For others such as Gentium Plus it may not happen until 2023.

Will you be adding more weights (such as Light and Black) to existing families? In most cases, no. Becoming axis-based does not automatically produce additional weights, especially ones outside the range of existing weights (such as Light and Black). We may plan a switch to axis-based to coincide with adding new weights but the two do not need to happen at the same time.

What if I prefer to use RIBBI families for the additional weights? For projects that currently have multiple RIBBI families you can continue to use the current fonts—they will remain available. If there is a clear ongoing need for a separate RIBBI family, it is possible to continue to produce both a primary axis-based family and a separate alternate-weight RIBBI family. However, that will not be our common practice.